#A to Z Challenge E is for Eagle

E is for Eagle

The bald eagle pictured below was rescued over 20 years ago. Phoenix lives at the Dickerson Park Zoo in Springfield MO. On alternate years for the past decade, I've been responsible for scheduling an eagle day event at a local refuge. One day is focused on elementary age children and the second day is designed for the general public. This year we had a new exhibit, the hacking tower. 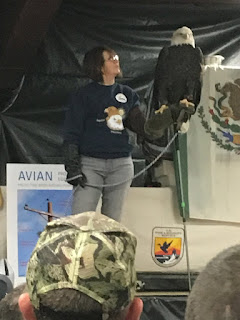 The pictures below show students using scopes to view an active bald eagle nest and one picture shows a model hacking station. 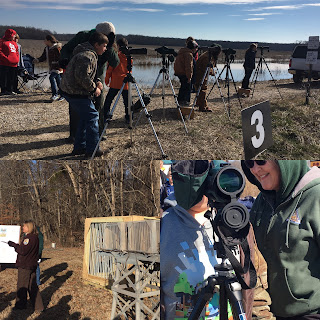 The refuge was one site where Eagles were hacked during the span from 1988 to 1994. Hacking is a method used in an attempt to repopulate the bald eagles in their natural habitat in the lower 48 states. Two or three young eaglets were placed atop the hacking tower in a large coop. Staff climbed the 20 feet high tower to take food and water to the eaglets. At first, the eaglets had to be fed 3 times a day. Oh, and the staff members also had to cover their faces so the eaglets would not imprint on them. As the eaglets grew, they were allowed to perch on a limb. When they fledged, they flew close to the tower. When they were ready, they flew far away to find a mate. Many returned to the refuge to begin their family duties. This program was a success, 34 eagles were hacked during this period of time.

Throughout the month of March, I am participating in the Slice of Life Challenge, hosted by twowritingteachers.wordpress.com. The month long goal is to write a daily post reflecting on a portion of your day. This is my 7th year to participate. I enjoy reading "slices of life" written by other slicers, connecting with them by commenting, and reflecting on a part of my day. To become a writer one must write, so it makes logical sense to me, I accept this challenge and attempt to write.

This work is licensed under a Creative Commons Attribution 3.0 Unported License.

"Inspiration exists, but it has to find us working."